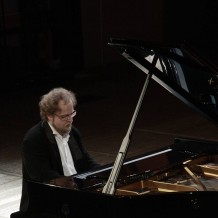 A pianist Philipp Subbotin graduated from the Russian Academy of Music of Gnesin(Moscow). He then continued  his studies at the Academy of Music  of Arts  in Prague and graduated with a master degree in Arts. He was a student of a famous pianist of the XXth century ,Ivan Moravec. In 2001 the pianist became a laureat of the International Competition in Italy (Vicence).
Philipp is a general manger of a music school «Gradus ad Parnassum» at the Russian center of science and culture in Prague .He is also a director of  a series of concert projects  «Classical music for friends».Together with Dmitry Kalinin(balalayka)Philipp  created  an ensemble «Russian duet».
Philipp Subbotin worked as a member of the jury at various international competitions such as the Internationl Music Competioion of L. and M.Rostropvich(Orenburg, Russia), the Music cometition of  F.Lizst in Budapest at the Russian Cultural Center,  «Piano seasons in Prague», «Young talents of Chukotka».
The pianist gives regular performances at the Moscow Internationl House of Music, in  concert halls of Gnesin, at the Central House of Arts(Moscow), in  Martin Hall in Prague, in Radium Palace in Yahimov and in various philarmonic halls in Russia.
Philipp Subbotin often performs in European concert halls :in Austria, Belgium, Spain, Italy, Denmark, Sweden and Serbia.